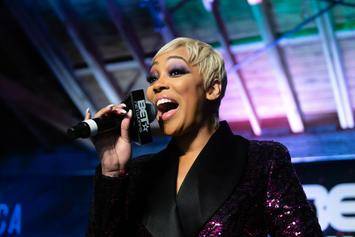 The Dolly Parton and Kenny Rogers fan recently made her Country debut on “Pray” with Jimmie Allen and Little Big Town.

She’s known to be an R&B powerhouse who has delivered some of our favorite classic jams including “Angel of Mine,” “So Gone,” and “The Boy Is Mine” alongside Brandy, but it seems as if she’s looking to switch things up in the future. Monica was just a teen with an R&B dream when she first entered the industry, and now the award-winning icon tells Billboard that she’s readying a Country album.
Monica shared with the outlet that she is plotting the release of her first independent album Trenchesâ€”a project that she teased during her Verzuz appearance with Brandy last year. Trenches hasn’t even hit DSPs but that hasn’t stopped her music hustle as she continues to make magic in the studio.

The singer said that while growing up, she was inspired by Country icons like Kenny Rogers and Dolly Pardon. Monica recently made her Country debut alongside Jimmie Allen and Little Big Town on “Pray,” and she’s excited about making the big leap, like others have done in the industry, from one genre to another. Cue Nelly.

“I grew up loving country music and my stepfather, who raised me, is a Methodist minister, but he also drove buses and he would take us to Nashville, Gatlinburg, and Dollywood in Tennessee,” the singer stated. “I became a really big fan of Dolly Parton, at about eight or nine years old. That was my real introduction to country music.”

“Shortly after, it was Kenny Rogers. I started listening to the depth of the songs and the fact that they were unafraid to say whatever it was they felt. I felt like this was a great time for me to really step into an area that Iâ€™ve always admired and loved.Ã¢Â€Â¯Weâ€™re just getting started, but I have so enjoyed it and been welcomed with open arms.”

K. Michelle has attempted to break through in the Country scene for years and has partnered with several popular artists in Nashville. She hasn’t yet had the breakout that she has hoped for, but even her R&B fans continue to support her endeavors.